Our ability to move our bodies throughout the week depends on so many things: space at home, outdoor access, our physical needs, and especially our time. That’s why this Screen-Free Saturday we invite you to Unplug to Move!

This weekend, make a commitment to connect with your body and invite kiddos to do the same. Go for a family walk around the neighborhood while following social distancing guidelines. Stretch. Tumble off the couch. Have a dance party. Play hide n’ seek. Whether you’re in a studio apartment or have acres of land, there are so many excellent, screen-free ways to remind our kids (and, OK, ourselves!) that being a kid IRL is way more fun than running around in a virtual world.

Hiding games: Having been a childcare provider for over a decade, I spent a significant chunk of my time hiding in closets, behind a suitcase, while babysitting and nannying. Most recently, I successfully lodged my 6’0” body into a washing machine and was crowned “CHAMPION” by two six year-olds and a couple of 11 year-olds. When was the last time you played hide n’ seek together? Or, my favorite challenge? “Hide the Rock.” Take an object (or multiple) and have the “it” person hide it. The seekers look for the object(s) and then get a turn hiding. It’s a real-life treasure hunt!

Yoga: Yoga is a great Saturday morning kickoff activity to bring presence, awareness, and fun to the day. Plus, everyone from babies to 99 year-olds can get into yoga! Can’t touch your toes? Great, there’s yoga for you. Your child is a super gymnast that can stand on their head? Yep, yoga is great for getting that energy out. Your child isn’t engaged? Meet them where they are: the 2-year-olds in my class were into trucks, so our “downward dogs” became “excavator scoops” and our “forward folds” were “cranes.” Families can also make or purchase great yoga story books and yoga cards, which can make it feel more like a game and less like an exercise.

Big body play: The science is out, and it tells us that children need big body play: fast, wide movements, big bear hugs, wrestling, heavy lifting, rolling, tumbling, crawling, swinging… the list goes on. One of my favorite activities with kids 6-12 in a small space is “The Spider Web” (also called “Ninja Lasers” for certain crowds):

Each kiddo gets a ball of string or yarn (we’ve even used old birthday streamers).

We picked a space inside (outside works, too) to play and cleared out any obvious dangers such as things that will fall and identify others that shouldn’t be touched. We usually did this in a bedroom.

Say “GO” and all “spiders” go to work, wrapping their string around furniture, door knobs, and more until it runs out.

As if that wasn’t enough fun, now comes the challenge: getting from one end of the room to the other without touching the string. Otherwise… “ZAP.”

Build upon the difficulty by adding more string, navigating it holding hands, trying to rescue an object that gets thrown in the middle… the possibilities are endless! We spent at least 3 hours doing this one day, adding on to our play. When I was over it, the kids kept going!

Check out our BINGO Card for activities for the whole family! 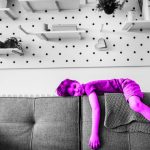 Grown-ups, get your game faces ready. This article from Fatherly has some great tips for indoor big body games that also work during the week in between your WFH grind. While we might replace the word “distraction” with “quality time,” you get the idea! 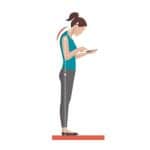 Anyone else having a sore neck from all this screen time? Experts call this our “TECH NECK” and it’s a common issue especially while many are working from home. Give your neck a break on Saturday and every day! Putting down the screen will help and these stretches are designed to relieve that tension.

Make sure to stay connected with all of our Screen-Free Saturdays ideas, resources, and fun by taking the pledge: