How to Nourish Screen-Free Connections: Lessons from Camp Grounded 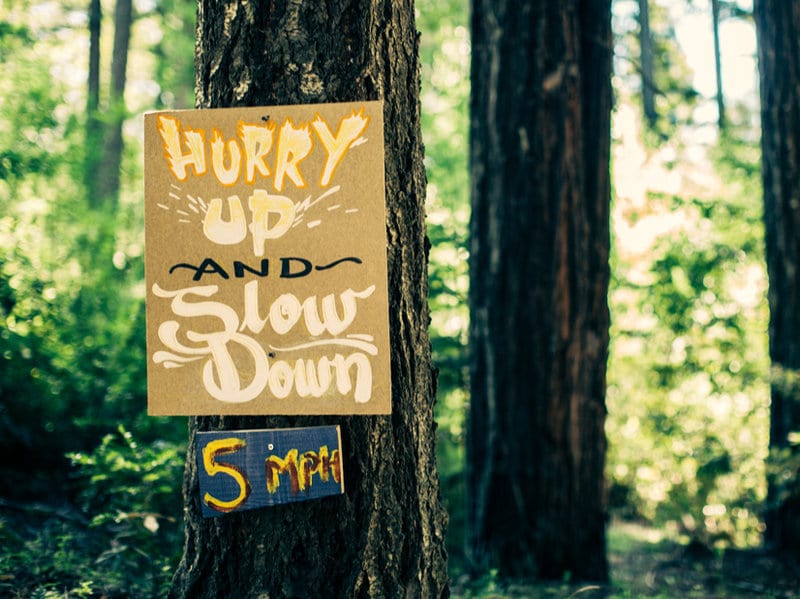 We’re parents, and proud ones. Our kids, now ages 20 and 23, have each already enjoyed healthy, respectful relationships, which we regard as a far better marker of functional personhood than grades or money. Still, we’re glad they can support themselves now.

Our only regret is having let them spend so much time with screens when they were kids, and then buying them laptops and smartphones which encouraged the practice. If we knew then what we know now, we would have deliberately carved out more time for family conversations and activities in real life.

When the kids were small, screens didn’t seem like a big deal. “We trust their native instincts with food, and with rest,” we thought, “so why not trust their instincts on play?” Our parents had trusted our instincts with toys when we were kids. Little did we know though that since then, toys have been scientifically honed to slice into childhood eyeballs. Children manipulate Legos. Video games manipulate children.

Right now, face-to-face communication is being replaced within a single generation by the practice of looking at and touching small pieces of glass (smartphone screens). According to a 2016 Bank of America study, 29% of Americans and 39% of millennials engage with smartphones more than with people. A 2016 survey by Common Sense Media found that half of teens feel addicted to their devices.

According to these two measures, we’ve nearly passed the tipping point.

Why is this happening? What can we do?

While humans can socialize through a piece of glass, the human nervous system cannot. Our paper just published in The Journal of Neural Computation (DOI: 10.1162/neco_a_00988) uses the mathematical language of information flow to explain why. Human nervous systems communicate on two parallel channels, not one: the content channel of words, and the trust channel of vibrations.

It turns out the old fogies have been right all along: face-to-face communication matters a lot. That’s because when we’re talking face-to-face, micro-expressions from our faces and nano-gestures from our bodies carry way more information than our words do. Our nervous systems use that information (called meta-data) to make sure the source is genuine and actually there. In other words, we need meta-data to connect and trust. Study after study has shown that the more time people spend communicating online without that crucial metadata––that is, without our native trust-channel––the more likely they are to be lonely, anxious, and depressed.

We all want our children to be happy, and to ultimately have the social skills to bond with and nurture their own children. If our kids can’t feel connection, how in the world could they train that skill in anyone else?

But there’s good news: we can reverse this trend by deliberately spending more time on faces than on screens. Here’s an illustration: 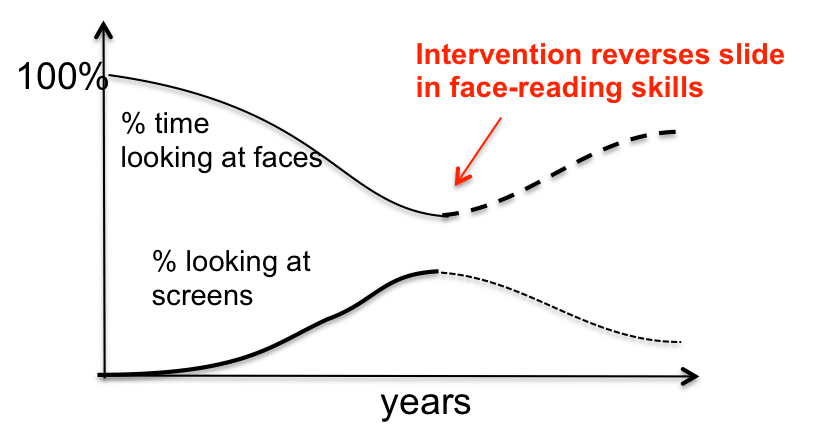 When you spend more time looking at faces, and less time looking at screens, those feelings of anxiety and addiction dissipate. If changing your family’s facetime/screen time ratio seems like a tall order, it’s because it is.

Fortunately, the non-profit organization Digital Detox has found a way to solve this problem, at least for a few days at a time, in their Camp Grounded summer camp for grownups. Set at a forest summer camp pre-season, Camp Grounded is a safe “container”: a set of temporary rules by which everyone, by mutual agreement, lets their guards down in the same ways at the same time. The container they’ve created works wonderfully, and also perfectly illustrates the mathematics of information flow.

We’ve experienced Camp Grounded four times (it really is that amazing), and have been inspired to distill the rules of Camp Grounded into three mathematically-backed principles that apply as well at home as in the Redwoods. We’ll outline them here, and give try-at-home suggestions below.

Of all possible data problems which frighten scientists, the most fearsome is the boogey-man of “systematic bias.” Data that is systematically biased is irredeemably corrupted by nearly-invisible forces. In commercially-sponsored messages, the profit motive introduces systematic biases that make offerings extra-attractive, instant, and “tasty” rather than dull, slow, and “bland.” Nature offers both kinds of data, the bland along with the tasty. Our nervous systems need that balance. But balanced data is rare online, because the profit-driven systems that supply most online data try to grab our attention and our money by displaying in attraction-amplifying contexts what they want us to buy at times they think we’re most susceptible to buying. That’s their job.

Paying for chores or for time outside or grades––whether with an allowance, new toys, or screen time––is a kind of commercial sponsorship too. Indeed, multiple studies have shown that incentivizing behavior with tangible rewards reduces intrinsic motivation. So consider motivating chores and other “bland” activities with the intrinsic social reward of time spent together. For example, try doing chores or spending time outside together as a family. You might also invite your child to do homework in the room where you are completing the work you’ve brought home. The key is to make “bland” activities more “tasty” by making them sources of social information.

Camp Grounded has no ads, and your only obligation there is to human experience. Live music everywhere, great cafeteria, towering trees, lawns, campfires, bugs. Slack-line, yoga, Frisbee, watercolor, wander, chill, nap. No interruptions, no hard rules or deadlines, no agendas.

As a general rule of mathematics and physics, simple things work more reliably than complicated ones. One favorite way to simplify a problem, or a problem-space, is to find parts of it which are like other parts—to find its symmetries. Humans are symmetrical for the most part. We’re different sizes and levels of hairiness but have the same mechanical, emotional, hormonal, and metabolic systems. Basic human symmetry is why we generally communicate so well in person (as long as categories like male/female, old/young, Black/White etc. don’t get in the way). Human-to-human is the most symmetrical arrangement possible.

At Camp Grounded we didn’t use real names or share information about our jobs, so we couldn’t gauge who was richer or more powerful. We had to interact symmetrically, as equal human beings who chose to be together. Of course some people were still in charge, but first and foremost they were people.

Those who understand attention mathematically know that psychosocial problems often result from focusing too much and are cured by chilling out.

Living in a forest invites you to notice sounds and happenings everywhere around you. It’s the perfect place to blur your vision, relax your eyes, listen all around, and not focus at all on anything in particular or any time in particular. (To encourage this at Camp Grounded, we all agreed to speak of time in generalities. Instead of hearing “dinner will be in an hour” you might hear “dinner will be in about a yoga class.” Clearly, being late was not a sin at Camp Grounded!)

Science teachers love to show how the sympathetic vibrations from one ringing wineglass or tuning fork will automatically ring another. The same principles apply to more complicated shapes, including very complicated human shapes, when they’re nearby and their nervous systems are hooked up right. (Human resonance isn’t really quite that simple, but it’s close.) So when people share intention in a stress-free, quiet place, we resonate mechanically, much like tuning forks. In fact, our nervous systems thrive on this interpersonal resonance—this proximity connection—more than on words.

Doing things together addresses a collection of digitally-induced woes at once: sensory deprivation, lack of empathy, alienation, depression. Community and connection cure.

How to use these principles at home

Avoid Incentives: Make chores and other “bland” activities more attractive by doing them alongside your children. Keep phones out of the bedroom to limit exposure to digital advertising. Bonus: Removing the blue light and interruptions will improve your sleep.

Symmetry: Create your own temporary tech-free oasis at home (like, for instance, Screen-Free Week). Get input from kids for how to run it, let them help enforce it, and invite their friends and their friends’ parents. Make your digital detox fun!

Diffusion over Focus: Try an hour a week without working, preparing, cleaning, reading, watching videos––or even talking. “Doing nothing” (or doing what strikes you) is actually calibration practice, where you learn to feel your needs instead of calculating them.

Vibration over Words: Keep phones off the table. In many families, mealtimes are the only times where people can see each other face-to-face all at once. Interruptions from phones distract everyone, and carrying parallel conversations hopelessly scrambles who is frowning at whom, or what. (Are you mad at me, or was it the text you just read?)

The key to safely using tech is using it for what it’s good for: communicating details of where and when, lists that you’d like to refer to later, and other straight-forward facts. Digital communication is untrustworthy for communicating emotions, especially strong emotions, because it transmits one-way cues like “fear,” but not the two-way resonance we need.

(The essay has been adapted from material on the Organic Bandwidth site, https://medium.com/real-digital-hybrid-living/)